Recently, electric scooters have become very popular because of how effectively they help people get from point A to point B. Furthermore, they make perfect sense if you live in a crowded city with constant traffic jams.

Electric scooters had come a long way from when they first began. They now have a better battery life, a more powerful engine, and are far easier to use. If you do a quick search online, you will find a long list of electric scooters for sale. Some of them are cheap with basic functions, while some are expensive and come with a plethora of features.

If you are in the market for a decently priced electric scooter with tons of features and will last you for a long time, then you are on the right page. We will be doing an in-depth review of the Segway Ninebot KickScooter ES2 in this article. 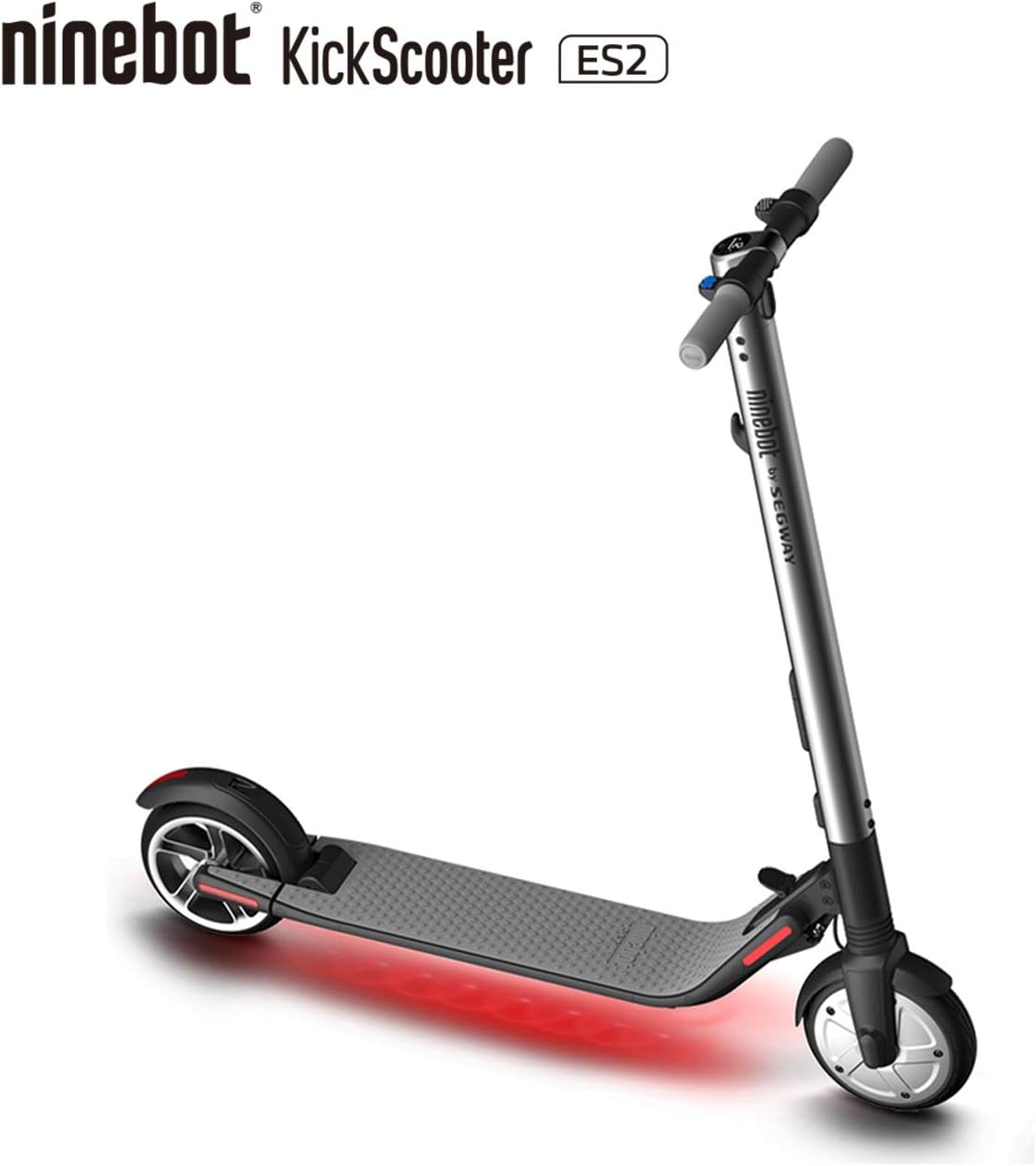 Segway, Inc. is an American company that is known for manufacturing two-wheeled personal transporters. It is famously known for its Segway PT and miniPro product lines.

Since 2015, Segway has been owned by Ninebot, which is a Chinese company. The company is known to primarily market all of its products to several niche markets, which include warehouses, police departments, industrial sites, corporate campuses, and so on.

The Segway Ninebot KickScooter ES2 is a stylish and lightweight scooter that comes equipped with a ton of useful features that make riding it fun and comfortable. There is theft protection, shock absorbers, colored LED lights, app control, and many more.

We will talk about all of this scooter’s features in detail below. Hopefully, we will help you make an informed decision whether or not this electric scooter is indeed worth putting your money in.

The Segway Ninebot KickScooter ES2 has a simple and sleek design. Its colored and minimalist frame make the scooter look modern and stylish. In fact, with the LED lights turned on, the scooter looks even better.

In terms of its build, the scooter is constructed using an aviation-grade aluminum body. The wheels are made from solid rubber and come with plastic covers. There is also a plastic thumb throttle and a plastic rear foot brake. Overall, the scooter’s build feels sturdy and rugged.

The company states that this scooter can reach a maximum speed of ​15 miles per hour. While these numbers are absolutely right, we found that it can go faster if the rider weighs less than 130 pounds.

This scooter features three power modes: sports mode (maximum acceleration), standard mode (moderate acceleration), and speed limit mode (slow acceleration). Although the last mode is the slowest, it is the most ideal for daily commutes, especially in crowded cities.

The Segway Ninebot KickScooter ES2 is designed well and is highly comfortable for everyday commutes. Since it weighs only 27 pounds, it can be folded and carried around easily.

The tires are hard and come with shock absorbers, which offer a smooth ride on asphalt and pavement alike. In addition, the scooter also comes with smooth suspension.

This scooter comes with a 187 Wh battery and offers a maximum range of ​15.5 miles. If you are lighter in weight and consistently drive on a flat surface, you will most likely be able to get a bit more than 15.5 miles. Its lithium batteries are manufactured by Samsung.

This scooter features a small LED screen on its T-bar. This shows the scooter’s speed and battery power. Right under it is the button to turn the scooter on or off and to switch between the different power modes.

You can also link your smartphone to the scooter through the Ninebot official app. Once you have linked them, you can use your phone to access certain data like frame temperature, mileage, current speed, and battery life.

In addition, you can also turn on theft protection using the mobile app. Once turned on, your scooter gets locked, and your phone will alert you right away if someone tries to move it. It also engages the brake, which makes it harder to move.

The app also shows firmware upgrades, vehicle diagnostics, and also allows you to change the behavior of the LED lights.

Summary of the Features 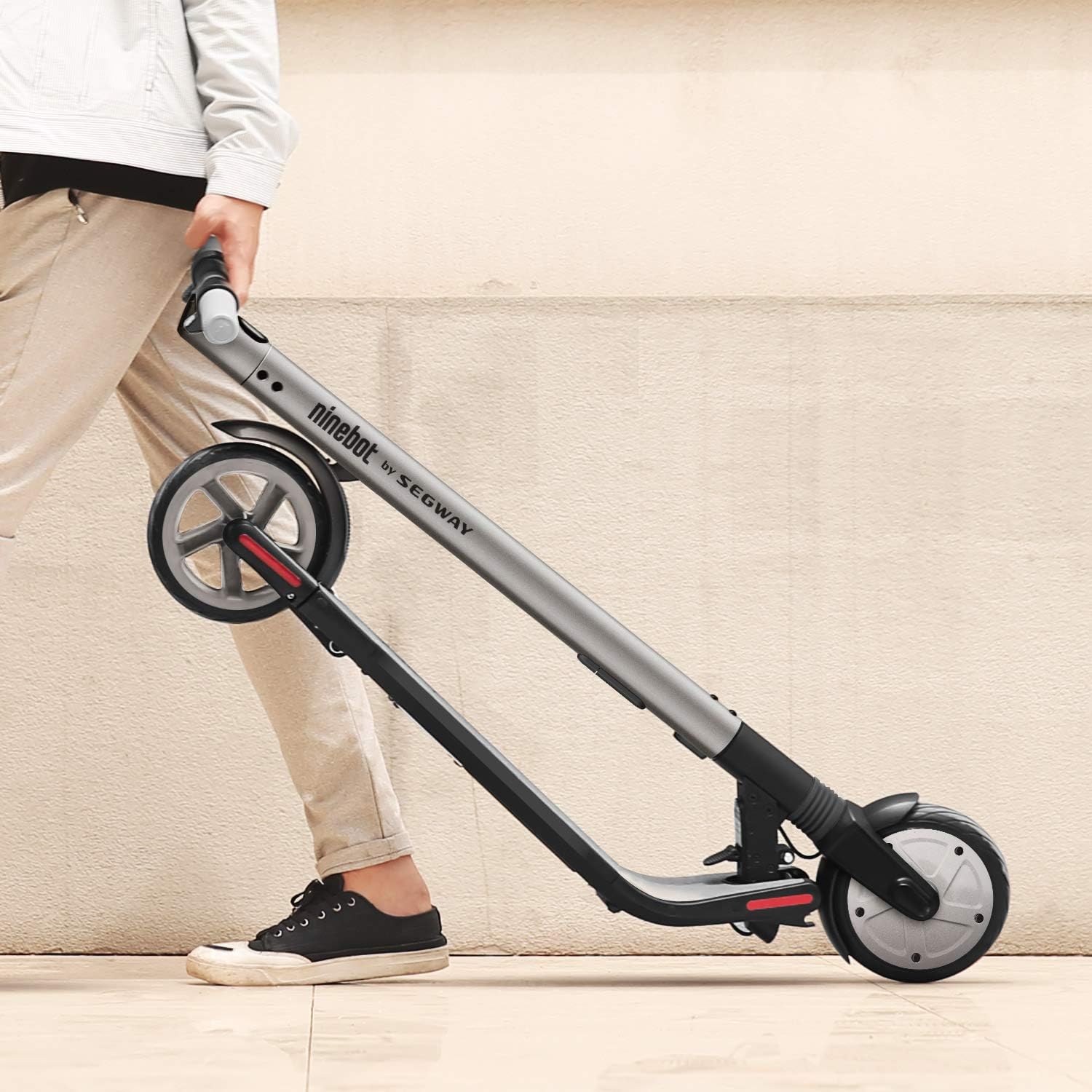 The Segway Ninebot KickScooter ES2 is a stylish scooter. It is Bluetooth-enabled and seamlessly connects to the Ninebot app to show real-time historical data.

This scooter has excellent top speed and impressive battery life too. The easy folding mechanism allows it to be folded and carried around easily. All in all, this is a fantastic scooter that will last you for a long time.

Comparison with an other ​​Commuter Electric Scooter

We compared the Segway Ninebot KickScooter ES2 to the ​FluideRide Horizon Electric Scooter. Other than the fact that both these scooters ​wheel size just about the same, there are quite a few differences between them.

For starters, the ​Horizon scooter has a significantly better battery life and power than its counterpart. Its maximum speed and maximum weight capacity are also significantly higher because it is a ​500W motor electric scooter.

​But on the other hand, the ​Fluid E Ride Horizon scooter does not feature any app support. Lastly, we found that the ​Horizon scooter’s overall build and quality were ​great ​but you will feel it in the scooter weight (40 lbs vs 28 lbs).

That is why ​​we recommend you stick to the Segway Ninebot KickScooter ES2 for your commute.

The Segway Ninebot KickScooter ES2 is a powerful, well-built, and long-lasting scooter that you will greatly benefit from. This is the perfect scooter for people looking to travel short distances in crowded cities.

Furthermore, its maximum speed is quite high, ensuring you take little time to travel around. We highly recommend you try this one out. If you need more autonomy check the Segway Ninebot ES4​ or the new Ninebot Max.

Like!! I blog quite often and I genuinely thank you for your information. The article has truly peaked my interest.