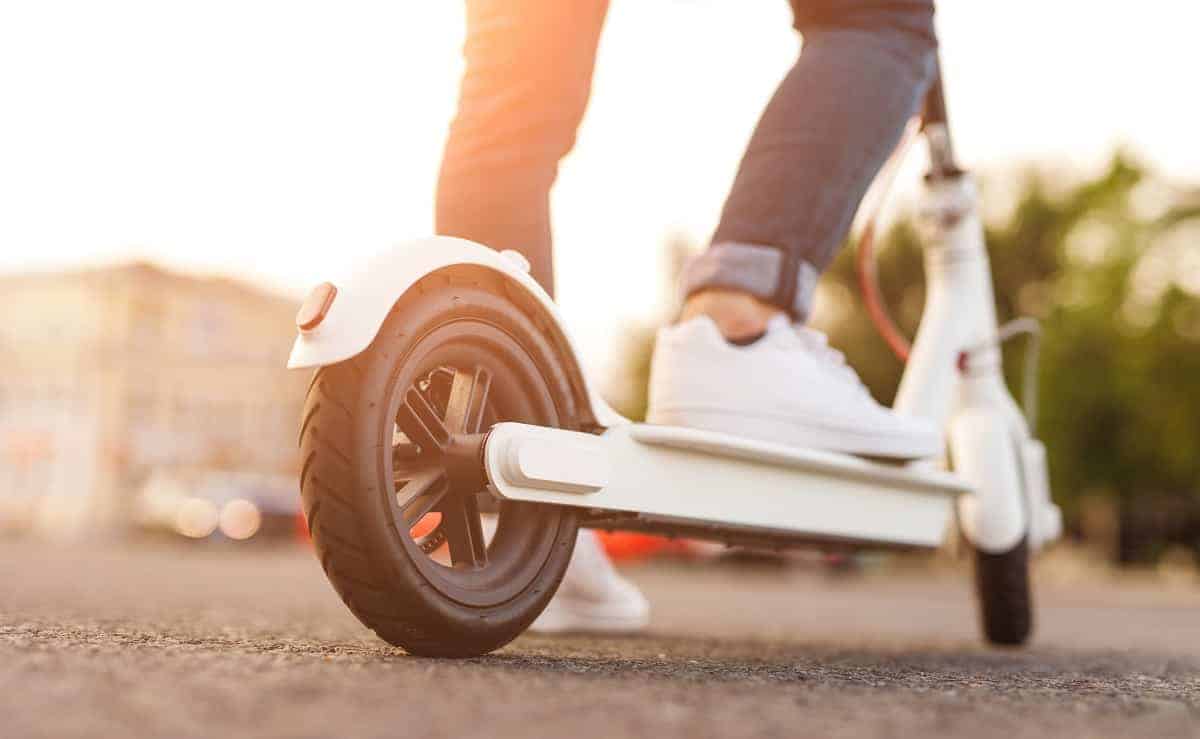 ​Here are some of the best long range electric scooters on the market.

Lightweight and easy electrical scooters make for a practical means of transport for anyone looking for a quick way to get around. They come with all the benefits of a motorcycle minus all the hassles. As such, you can cut through the traffic if you get the right model, and you can take it off the road as well.

After more than a century of refinement, the current e-scooters are niftier, faster, and allow you to go farther. Now you can go for long distances without worrying about running out of juice halfway to your destination. 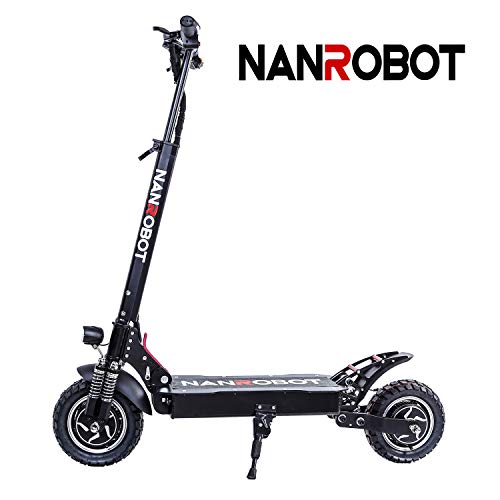 The Nanorobot D4+ is only a few steps removed from an enduro bike to let you have as much fun as you want but without the gas bill. The scooter boasts a sturdy aluminum-alloy frame and rides on thick 10-inch skid-resistant tires. The chunky air-inflated tires let the bike tackle rough road surface, making the scooter an all-terrain vehicle.

The electric bike boasts 2 independent, powerful ​Brushless 1,000-watt motors that provide a burst of speed when you need it. Since the motors are located on each wheel, you can switch between the rear or front-wheel drive. The powerful engine lets the bike tackle terrains with a 45-degree slant without losing a beat.

Four heavy-duty springs complement the thick tires and the sturdy aluminum frame to give the scooter a high load capacity of up to 330 pounds.

The e-scooter is IP53-rated, which means it is partially dust and water-resistant. However, that’s not an invitation to pressure wash the bike or ride it in the rain. Six shock absorbers reduce shock impact as you ride and bolster the bike’s load-bearing capacity.

The electric scooter uses a powerful 52V 23 AH lithium battery resulting in an impressive 45 miles range. You can use the bike to run your errands around the town without worrying about recharging. The e-bike comes with two charging ports to let you charge the battery faster. Instead of leaving the bike charging for 10 hours, you get to cut that by half.

This scooter comes with a 10-setting controller for added convenience. The controller lets you set the cruise speed and control motors. You can turn one engine off in Eco mode or run both of them in turbo mode. If you prefer riding from a seated position, you can fit a seat on the e-scooter without losing power or riding distance. A super-wide riding pedal lets you place both feet on the bike without worrying about falling off.

Despite its impressive size, the electric bike folds with a simple flick of a safety lever. That means you can take the foldable scooter with you on the subway or even on public transportation. At the bus stop, simply unfurl your bike and ride your way home. Foldable handlebars reduce the amount of space necessary to store the bike. 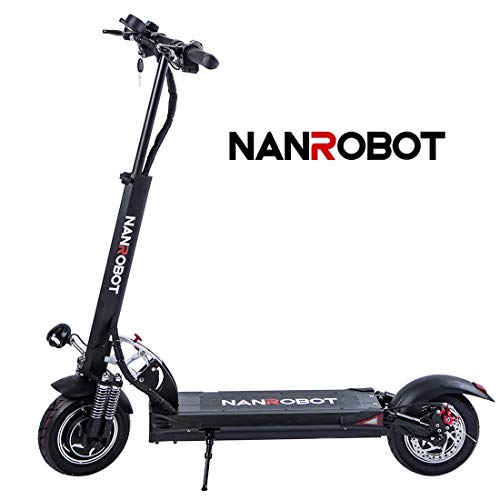 Like the D4+, the Nanrobot D5+ delivers an exceptional riding experience for anyone looking for a lean mode of transportation. The e-scooter is powered by two independent electric hub motors located on the wheels. That results in a powerful all-wheel-driven scooter capable of high speeds and climbing hills. You can engage both engines or just one to preserve the battery life, although that doesn’t give you the top speed.

Before testing the e-scooter’s top speeds of 40 mph, you’ll want to be sure of its stopping power. Luckily, the braking system on the bike doesn’t disappoint. It comes with both front and rear brakes to give the bike exceptional stopping power. The braking pedal is attached to the handlebars for greater control and will bring the bike to a safe and smooth stop even in wet conditions.

Despite the two powerful motors, the bike accelerates smoothly and won’t give you a frightening burst of speed when you open the throttle as it picks up speed seamlessly. The high capacity, 26AH 52-volt lithium battery gives the Nanrobot D5+ an excellent range between changes. The scooter is capable of up to 50 miles on a single charge. 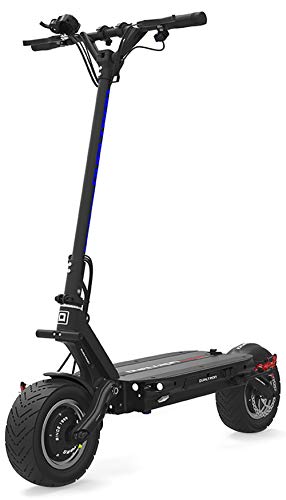 High speed and high power are some adjectives used to describe the Dualtron Thunder e-scooter. Every aspect of this bike is crafted to help it live to its reputation as a roadmaster.

A pair of 2,700-watt motors power the scooter (so 5400W of power) past the slow traffic at a top speed of 50 mph without creating a thunderous roar. Your thrill for speed will determine how fast you want to drive. The scooter comes equipped for a high-speed chase, as well as a daily ride to work.

It rides on 11-inch tires to glide over bumps and rough driving surfaces or even curbs. The tubeless tires are 4 inches wide for maximum traction on both paved and unpaved surfaces and are less prone to punctures. That means you can take your bike on the weekend for an off-roading adventure.

The tires pair well with the massive 160 mm disc brakes to give the scooter excellent stopping power even at high speeds. It takes minimal force to harness the power of progressive braking to bring it to a halt. The 15-step adjustable rubber suspension makes for a comfortable bump-free riding experience.

The scooter is powered by a 60V, 2072 Wh battery capable of an 80-mile trip on a single charge. The battery pack is tucked away under the extra-wide 12-inch deck for safety and convenience. The battery also powers the LED light system which lights up the bike for safe night riding. It takes 20 hours to charge the battery, but you can cut it down to 10 with a dual charger, or 5 hours with a quick charger. 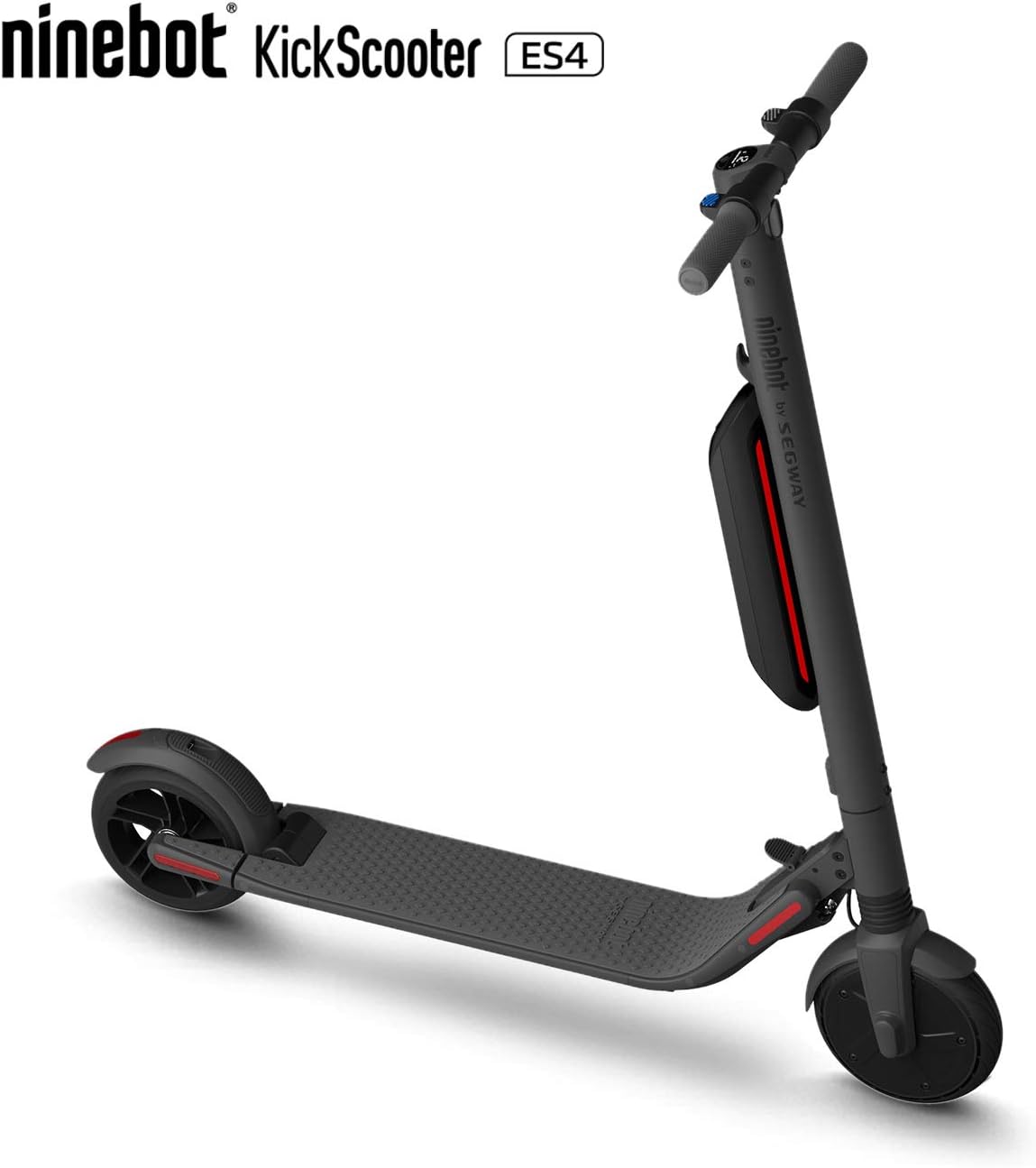 The Ninebot ES4 is tame compared to some of the scooters in this review. However, you can’t afford to knock this powerful scooter that’s rated for people between the ages of 14-60. The ES4 comes with an internal and external battery to let you handle a 28-mile trip with recharging breaks. You can choose between the sports and eco-modes when riding to preserve battery power.

The 800W motor propels the nimble bike at top speeds of 19 mph on city streets as you make your way to the office. You can coax an impressive 28 miles from the bike on a single charge – it takes 7 hours to fully charge the bike. The foldable design means you can take it with you to the office without worry about parking or storage space. At 31 pounds, you can comfortably lug it up a flight of stairs and stash it next to your desk.

The scooter rides on a tubeless 8-inch front wheel and a rear wheel that is half an inch smaller. The solid tires make for safe and comfortable riding on paved surfaces at high speeds. An electrical brake on the handlebars controls the front wheel, but the brake on the rear wheel is mechanically operated.

Shock absorbent materials on either end of the scooter reduce shock impact in the unfortunate event that you bump heavily into an object. The scooter’s sturdy and durable construction comes with a 220-pound load capacity. The powerful motor lets it handle a 15-degree incline without compromising performance. 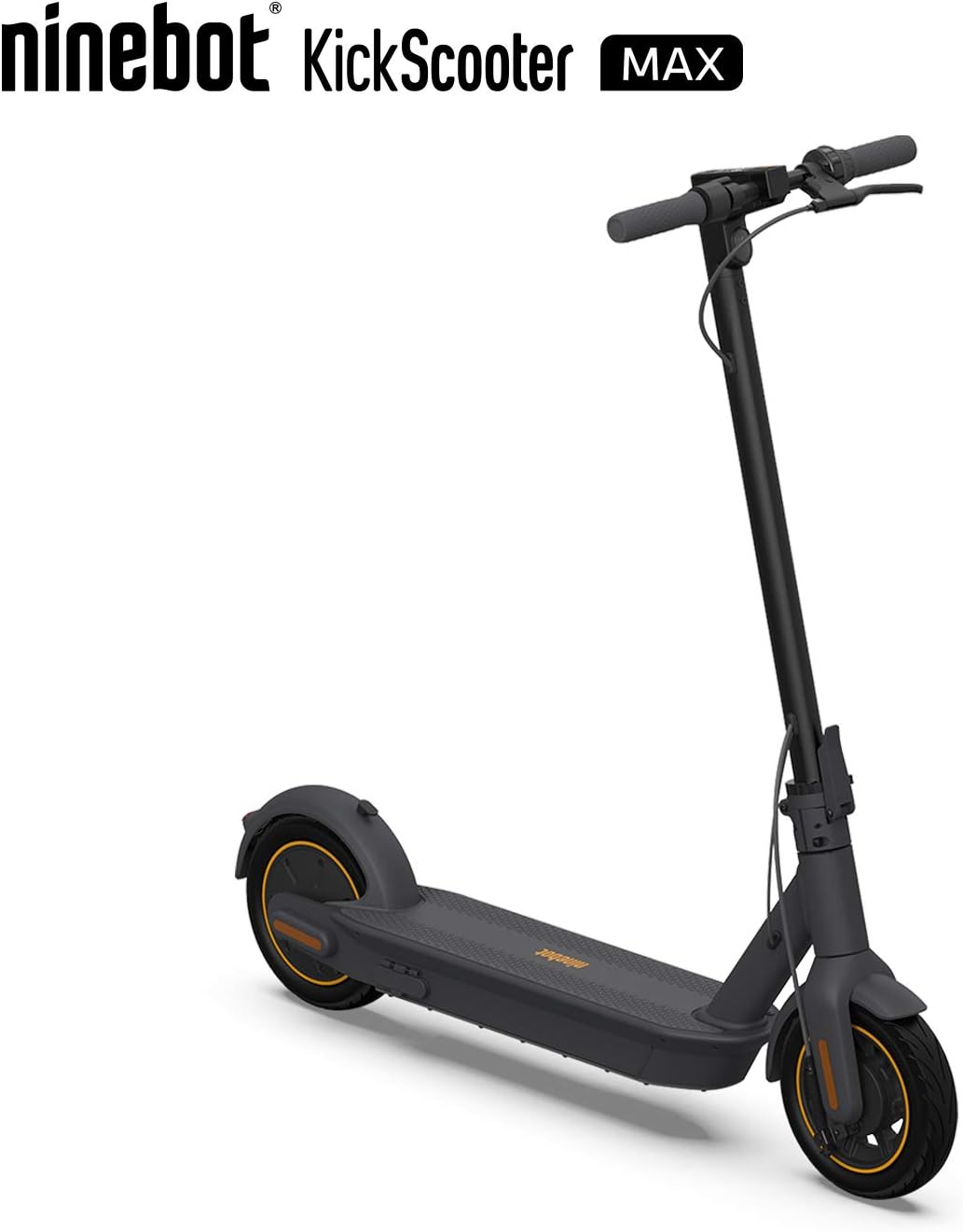 The Ninebox MAX e-scooter rides on 10-inch tubeless tires for a smooth riding experience on rough and uneven terrains. It’s available in a range of motors ranging from 350 to 700 watts. Coupling a powerful motor and self-healing tires makes for long uninterrupted rides.

The scooter is powered by a 552W battery pack to achieve an impressive 40 miles on a single charge. The long-range on this e-scooter makes it perfect for the daily commute to the office. It takes only six hours to fully charge the battery, and the protection mechanism extends the bike’s lifespan. You don’t have to worry about overheating, overcharging, or power surges. The scooter uses a small slim charger that you can carry with you anywhere.

The scooter comes with a spacious footrest with an anti-slip surface to keep your legs comfortable as you ride. Reflective stickers on the tires, rear lights, and a pair of LED headlights are some of the safety features to keep you safe on the road.

The scooter is crafted from aircraft-grade aluminum alloy resulting in a sturdy ride capable of handling up to 220 pounds. The scooter pairs with your smart device for added control and operation. You can keep a closer eye on the scooter with a dedicated app on your smartphone. The app updates you on the scooter’s general condition including speed, mileage, and battery life.

There’s no denying that the Dualtron Thunder electric scooter with its 80 miles range is the best long gange electric scooter in this bunch. However, these features carry a hefty price tag.

If your budget allows, get the Thunder, if not settle for a Nanorobot D4+, or Nanorobot D5+. If you’re looking for an affordable yet powerful scooter, you can’t go wrong with a Segway Ninebot.

Best Dualtron Scooter to Buy in 2020